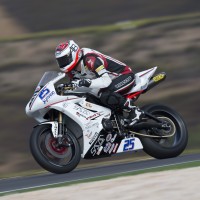 Alex Baldolini will line up 10th on the grid tomorrow for the penultimate round of the 2012 World Supersport Championship.

Having adjusted the electronics to improve traction and the grip levels on his Suriano Triumph machine, Alex improved his lap time significantly to qualify on the 3rd row of the grid.

The race tomorrow will be a tough one at the undulating Portimao circuit, with a variety of weather conditions forecast depending on who you talk to within the paddock.

Whatever the weather, and despite a small crash towards the end of the session, Alex is confident of another solid performance as he aims to end his debut season within the World Supersport Championship inside the top 6.

Alex had this to say after making it back to the pit box after the session: “During the final part of qualifying there was a lot of traffic. It’s a shame that I crashed on the last lap because I think I could have improved my time. I would have liked the second row for sure but for the race I am ok as we have good pace.”

Tomorrow’s race is scheduled to run over 20 laps and is due to start at 1330 local time.