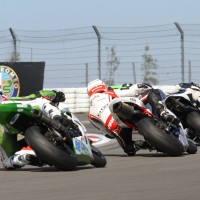 Alex Baldolini may have never ridden at the historic Nurburgring circuit before but that didn’t stop him finishing in a superb 6th position in today’s World Supersport race in Germany.

Starting from the third row he made a steady start to maintain his position after the opening few laps.

By half distance there was a titanic battle at the front between five riders but the racing behind was just as fierce. Alex had by this point moved into the top eight and he set about hunting down the riders battling for 6th.

Getting into his rhythm he soon caught and subsequently passed Ronan Quarmby but the talented Italian wasn’t finished there and had soon latched onto the back of Vladimir Leonov and former 125cc World Champion Gabor Talmacsi.

The race was eventually won by who overcame a number of challenges from Jules Cluzel and Fabien Foret who finished 2nd and 3rd respectively. Alex finished a very impressive 6th, and the 10 points that he won today elevated him into 7th in the overall championship standings.

The penultimate round of the championship is at Portimao, in Portugal on September 24th, 2012.