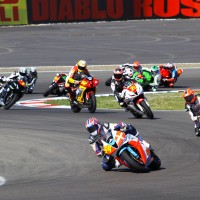 After an up and down weekend, Alex Schacht rode maturely at the Nurburgring earlier today to claim another top ten finish in the UEM European Superstock Championship.

Qualifying 13th the talented Dane found himself boxed in at the start, ending the opening lap in 14th.

With the leading 6 pulling away at the front Alex was locked in a great battle with a swarm of other riders all wanting to lead the chasing group.

By mid race, Alex was 12th and was fortunate not to be taken out when Sebastien Suchet took out his fellow Swiss racer Robin Mulhauser.

With two laps to go Alex had eased into 9th and rode sensibly until the end to collect some valuable points in the championship.

“Honestly I expected more this weekend” commented a slightly disappointed Alex. “We have tested here and in the last two rounds have been almost on the podium but this is racing and today I was lucky not to crash so for this I have to be thankful. The team made some more changes for the race which were better, it’s just a shame I made a small mistake in qualifying. For the championship we are now in the top 6 and not so far from 4th overall which is my goal now in the last 2 races.”

Round 9 of the UEM European Superstock 600cc Championship takes place at Portimao in Portugal in two weekends time.