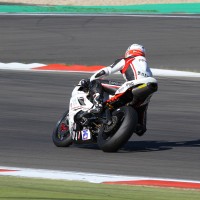 The World Supersport Championship arrived at the Nurburgring for round 11 with Suriano Triumph rider Alex Baldolini looking to recapture his earlier season form.

Having never been to the Nurburgring before the opening session was used to learn the layout of the undulating circuit and for Alex and the team to start work on a base setting for the rest of the weekend.

Going into final qualifying Alex was a little bit further down on the leaderboard than he wanted but both he and the team worked hard to find a solution.

The final five minutes of qualifying would see the a number of riders fall meaning some lap times couldn’t be bettered, but Alex will start tomorrow’s race from the 3rd row after securing 10th position on the grid.

“I haven’t been here before so of course I needed to learn the track and then also our first session wasn’t as productive as I wasn’t pushing 100% but we worked hard and have arrived with a setting which is more comfortable for me. I think the podium battle is maybe going to be a little difficult to reach but I am confident that we can have a good race tomorrow.” commented Alex after the session

The German round of the World Supersport Championship is scheduled to start at 1330 local time tomorrow and will run over 19 laps.