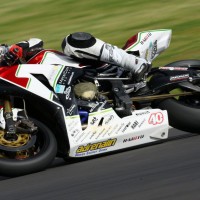 Round 7 of the FIM Superstock Championship began with dark clouds overhead but thankfully the few spots of rain that did fall couldn’t dampen the action in this hotly contested series.

The start saw the usual suspects hit the front while Alen Gyorfi who had taken his best ever qualifying position in 9th seemed to get caught up in the first corner pushing and shoving.

He recovered and ended the opening lap in 16th while at the front it was championship leader Eddi La Marra and Jeremy Guarnoni who began to ease away.

The next handful of laps saw Alen pick his way through the field and eventually settle into a battle with British rider Robbie Brown for the remainder of the race.

La Marra took the win ahead of Guarnoni while the winner of the last two races Bryan Staring carved through the field from 14th on the grid to take the final podium spot just denying three time winner this year Sylvain Barrier (Goldbet BMW Italia).

Alen’s result keeps him in 14th place in the overall championship with 3 rounds to go.

Round 8 of the FIM Superstock 1000cc Championship is at the Nurburgring on September 9th, 2012.